Twelve months ago, while vacationing in Hawaii, I came up with the crazy idea of making 2014 the year of, among other things, the Fitness Project. The vision was simple enough - zero in on one form of exercise and one dietary focus per month for twelve months. Do it. Learn from it. Write about it.

The execution was more complicated. I quickly learned that without an undue amount of stress it was hard to focus on both diet and a particular workout regime simultaneously and so I pretty quickly jettisoned the diet part and spent what limited free time I had delving into whatever the fitness focus of that month was - be it making it to a yoga class or swimming across mountain lakes.

What was both hard and rewarding was making it all work - paying to go to a barre class when a run out the back door would have been free and way more efficient; having the discipline to go to a tough interval class when all I wanted to do was chill out; rallying friends and family to partake in the experience I was creating. I also learned how woefully inadequate I could feel in so many dimensions - too intense for yoga, too chill for high-intensity interval training, too fat for ballet, too skinny for zumba... and how empowered I could feel - wakening from a deep meditation, crushing a workout, finding strength and length, and shaking my bootie!!!

I am one year older, one year wiser, a wee bit fitter and glad to share some of the highlights from my Fitness Project experience:

Lessons from a Month Dedicated to Yoga: I spent a lot of time looking at myself this month, in the mirror and from all angles in different asanas. By my hundredth downward dog I got to really appreciate the crepey folds of my two-baby belly. In all backbends and standing poses the third eye of my now-outy (i.e., herniated abdomen) belly button winked at me. It was a challenge to not grimace at the imperfections that I usually avoid by not looking. But if these things were impossible to ignore, I found that in the end it was possible to withhold judgement. It may not be as far as complete self-acceptance, but it is a long way from self-loathing. Namaste.

Month Two - High-Intensity Interval Training
The Seven Minute Workout: When its 10 PM and I am a full-days-work-and-kids, two glasses of wine, one bag of trail mix, and one car-fully-packed-for-the-ski-trip into the evening I find that now is when I can finally start thinking about what I might be able to squeeze in for a workout today. Not the ideal, certainly, but the for real.

Month Three - Rock Climbing
Jailhouse: What was so interesting to me about what turned out to be an awesome climbing day, was how natural it felt to be out there, climbing hard on real rock, even though I haven’t done it in so long. Though I am in no shape to climb well at Jailhouse, I was surprised to note how instantly my body reacted to the experience and how effortlessly I was able to drop back into the “zone”. As soon as I started climbing I felt a strange, but familiar calm come over me. It is very real up there on the exposed rock face. The slightest error can mean a fall, not necessarily an injury, but the unsettling feeling of falling uncontrolled through space until the jarring catch of the rope arrests your trajectory. Knowing the consequences, my mind stills everything else and it is just me, and my hands and my feet, and the suck and pivot of my hips, and the spotting of the next hold and the movement – powerful and deliberate. I will feel my body shaking with exertion, but as long as I am calm, as long as I can control my breathing and still my thoughts, I know that I am OK and that I will make it through. It is only when the panic takes over in my mind and I begin to doubt that my fingers and body finally give way and I hurdle through a short gasp of space. Such is the art and the sport of rock climbing.

Month Four - Biking
Have Bike Will Travel: When the time came to leave - nobody wanted to. We all could have spent a few more hours playing and then on our bikes going somewhere else, having another adventure. We test drove the experience of the self-powered get-away and everyone loved it. I am guessing I will get emphatic Yes!es next time around when I suggest another (and longer) such excursion - especially now that my kids have biked to the top of a ridge and gazed waaay down to the ocean and said Wow! We did it!

Month Five - Strength Training
Boot Camp(ing): So next time you are with a group of people, see if you can be the spark that ignites some positive action towards improving everyone's health and fitness - your own, your families, and your friends. Trust me, the beer and the s'mores taste even better after a great workout.

Month Six - Running
Five Reasons to Love Trail Races: For all of the above reasons (and the million I can’t articulate), and despite the crippling next-day soreness, I love, love, love trail running and racing. You will never PR in a trail race, but you will laugh, cry, bleed, leap, fall, fly, pant, gasp, wretch, heave, crawl, jump, climb, descend, smile, grimace, and most of all, and best of all, you will RUN.

Month Seven - Swimming
Better Than a Pool: Aside from the irrational fear of encountering a dead body and the somewhat less irrational fear of being bitten by a fish or something, I literally jump in every chance I get to swim in a natural water body - be it a lake, a river, or the mighty ocean.

Month Eight - Fitcations
Five Reasons to Just Go!: The world looks different from a mountain top. It feels different after a swim in a cold, clear lake. It smells different among towering trees and strong breezes. It tastes different after a heart-pounding run and a day spent playing. Get out and feel that difference for yourself and don't be afraid to try something new - who knows what you might be capable of.

Month Nine - Workouts For People Who Don't Like to Sweat
Knobby Socks and Pelvic Tilts: Admittedly I was a little snobby coming into these classes about what the level of effort might actually be. I anticipated gliding through a workout with a bunch of well-coiffed women who would be more concerned about their pedicures and outfits than the quality or intensity of the workout. To be honest, however, it turns out that I enter such a realm of intense focus and suffering during these classes that I literally don't even notice that anyone else is in the room. All I see is myself in the mirror - covered with a sheen of sweat and breathing intensely as I will myself to keep pace with the instructions and overcome the burning fire and uncontrolled shaking of my muscles.

Month Ten - Up With The Sun
On a Cool, Crisp Dawn: The most successful people I know and read about credit part of their success to the discipline of early morning exercise. While my aspirations are not of greatness, I do have a strong desire to maintain my fitness despite the constant time and life pressures I am facing at the moment. Shoehorning my workouts into the early daylight hours presents a small sliver of possibility, assuming my marriage can withstand it.

Month Eleven - Dance
For the Joy of It: Said "moves" were very sexy as demonstrated by the (did I mention curves-out-to-here) instructor. As performed by me and the many other stiff, slightly awkward and overly-enthusiastic dancers in the room they looked more like moves that would have made Elaine from Seinfeld proud. Note: That didn't stop us.

Eight Reasons to Love the Night Run: Between the hours of 9 and 10 PM no one expects anything of me. My husband is working, my kids are sleeping, and work is done for the day. I can take this time for me without anyone noticing and relish in "me time" without the least bit of guilt. I also give something to my dog - so my selfishness is really unselfishness.

And so there it is, a sampling of the journey through 2014. A lot of work, a lot of play and a few good workouts in between. What now for 2015? Not sure yet but I have a few more days here to think of something!
Here are the workouts I completed as part of my 2014 Fitness Project: 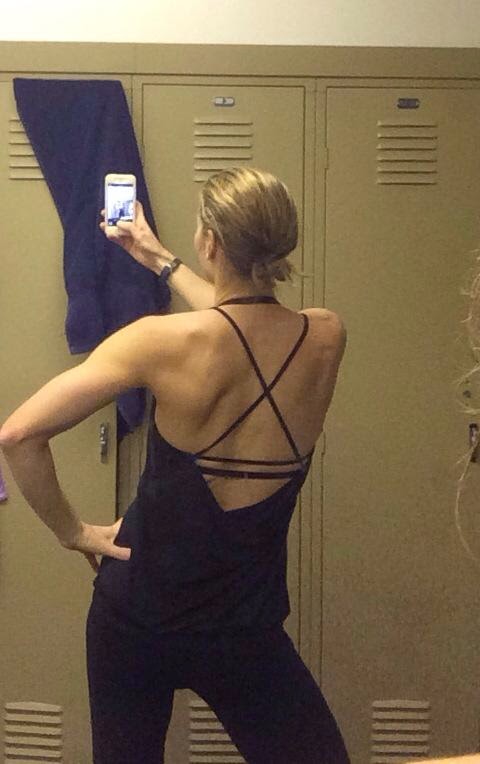 Month Eleven - Ditch the Workout, Join the Party
Month Ten - Up With the Sun
Month Nine - Workouts For People Who Don't Like to Sweat 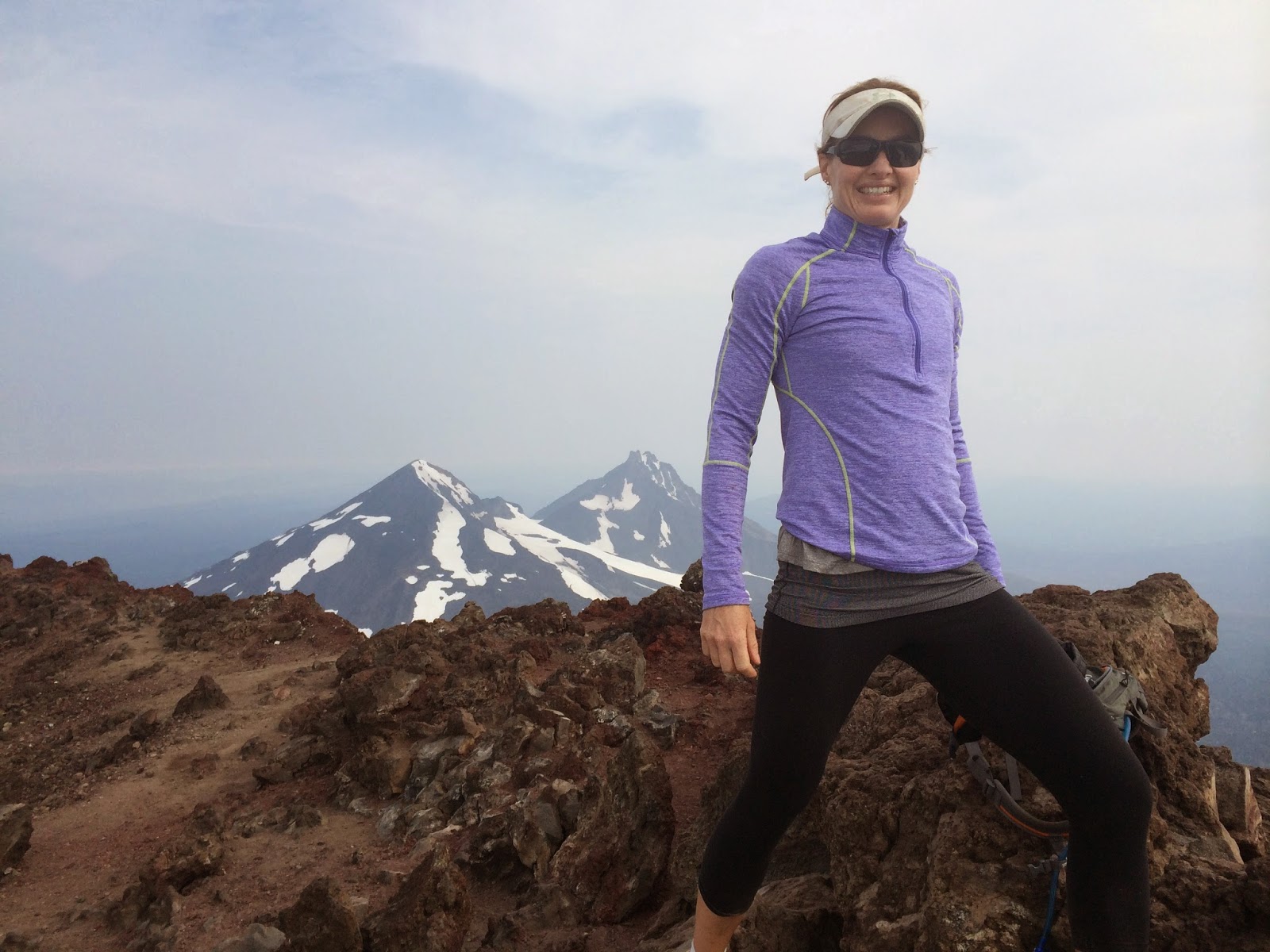 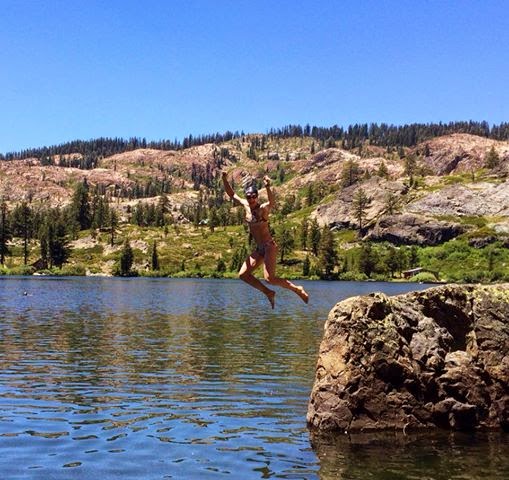 Month Six - Running and No Sugar 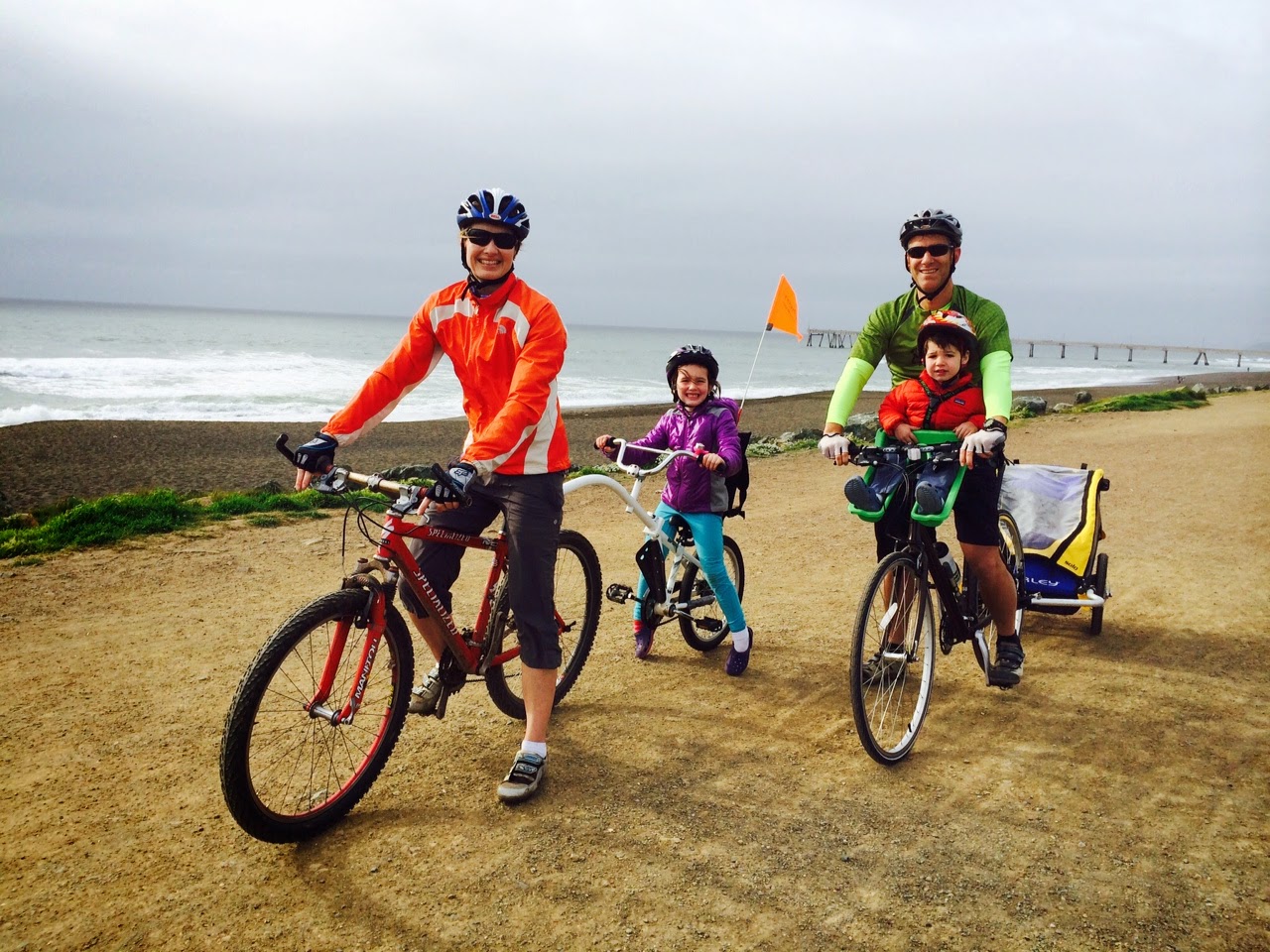 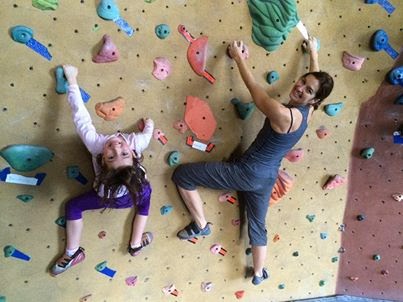 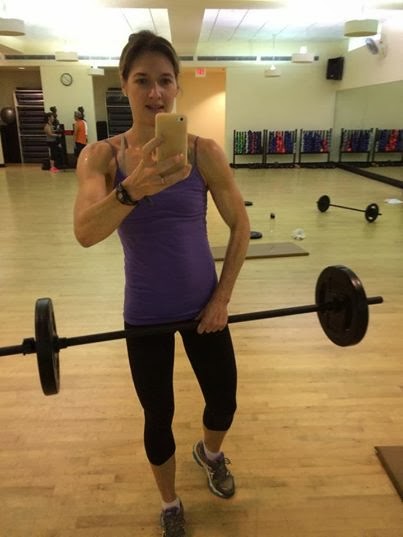 Month One - Yoga and Intermittent Fasting 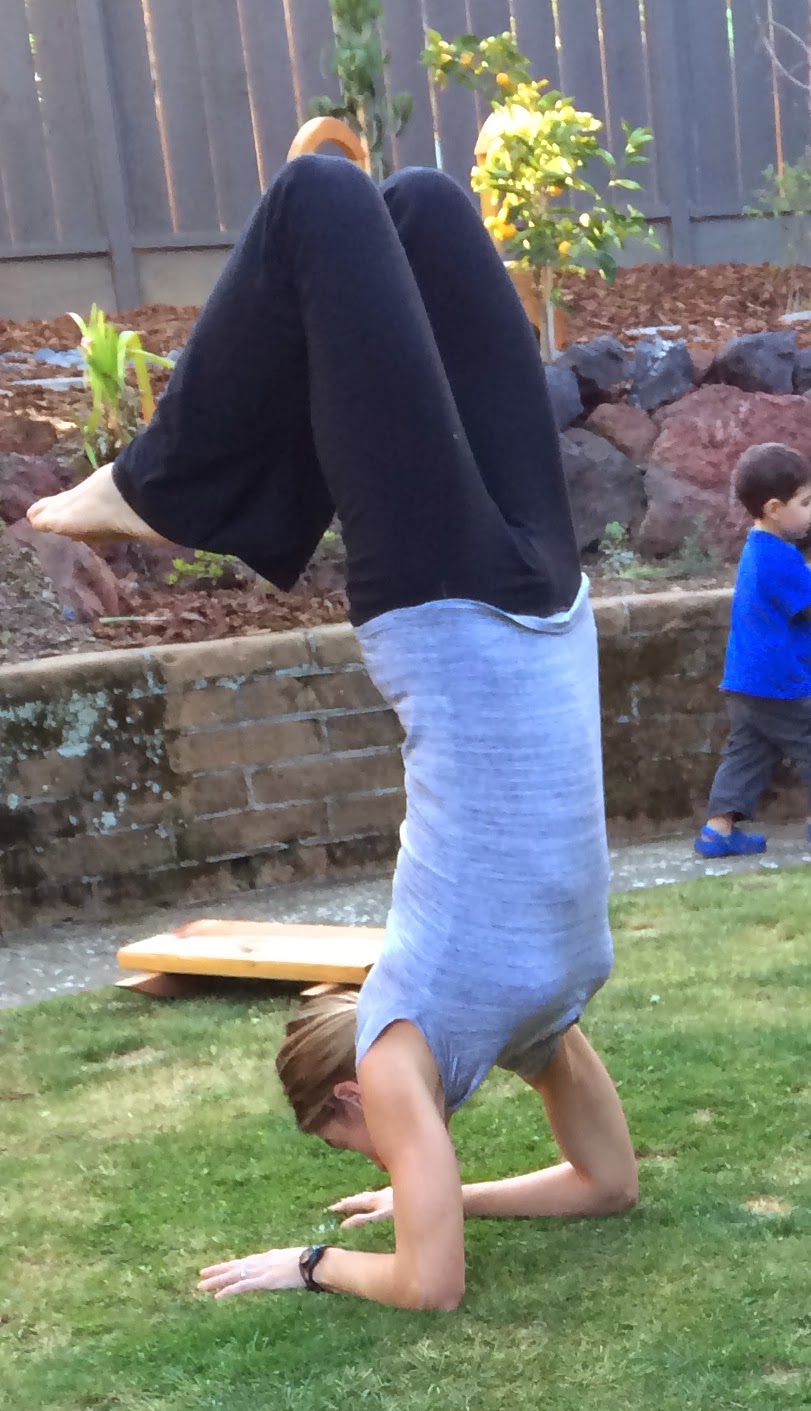 To learn more about my Fitness Project, please contact me at mommytasker@gmail.com,MommyTasker.com, or connect with me on Facebook.