2:35 PM
MommyTasker
5
Two weeks ago I decided to dust off my gear, stretch my creaky joints and make 2016 the year I started doing triathlons again. This is happening after about an eight year hiatus that is directly correlated to the birth of my first child. So I signed up for my first race (an Olympic distance event in April) and printed out a 6-week training plan.

Then I swallowed hard.

It turns out that you have to do a lot of workouts each week in order to get in shape for a triathlon, including hours in a pool and on a bike in addition to the 20-30 miles I typically run. So this was going to have to fit into what was already a pretty packed schedule, including 2-3 Tae Kwon Do sessions, 2 evenings of rock climbing, and the aforementioned running, plus the usual work/life/kids thing. I really am not sure how other people manage it - probably they don't also do TKD and climb - but since narrow focus has never been my thing, I decided that there was only going to be one way that I was going to be able to make this work - bring my family along for the ride.

So what does this family "Team in Training" look like?

Well, it meant that my track workout on Saturday morning was paced by my two kids on their bikes and the family dog (before the three of us tested for our Orange Belts): 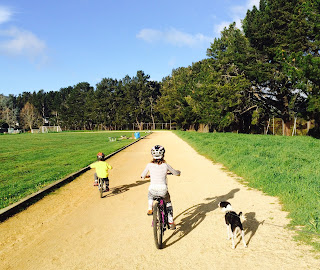 It meant I did my swim workout in the lane next to where my daughter had her Stroke School (pre-swim team) and while my son played on the splash pad: 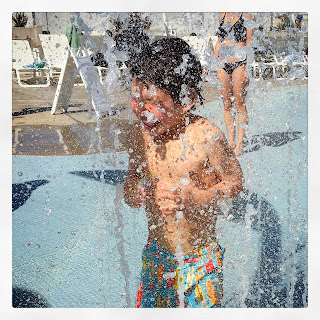 And today it meant that I did a 20 mile bike ride with my family, using the trailer bikes and racing my husband and son through the hilly network of bike paths and lanes near our house. 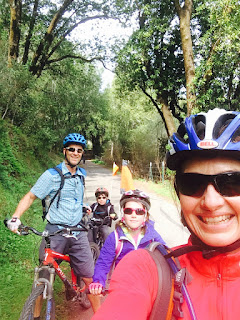 Are these perfect workouts? No.

Will I be in top condition when I line up in April, or as part of other events later this year? No.

Are they miles I am getting in while not sacrificing time with my family? Yes. And for right now that is what feels right to me.

As the days lengthen I am optimistic that I will be able to squeeze more in before and after work. But as it is, for the moment, I am just enjoying being out there and having a goal to squint at on the horizon. Bring it 2016 - I am feeling ready, and my family is going to be pretty fit as well.
Posted by MommyTasker at 2:35 PM